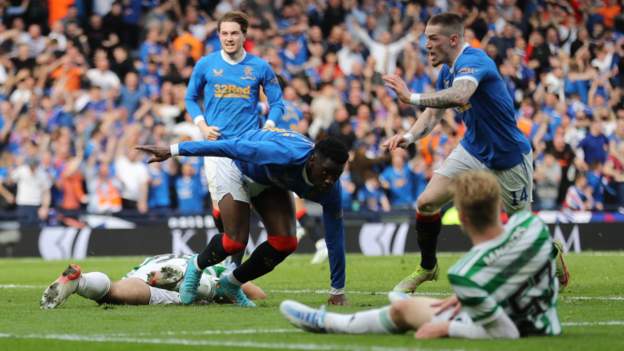 Rangers will play Hearts in the final of the Scottish Cup on 21 May after coming from behind to beat Celtic in extra time of a relentless and pulsating Old Firm derby.

It sealed an impressive turnaround for the Ibrox side, who fell behind to Greg Taylor’s goal in the second half before Scott Arfield equalised, and a chance at a first domestic cup for 11 years.


The rousing comeback also ends Celtic’s hopes of a fifth domestic treble in six seasons, having already won the League Cup this season and with a six-point lead in the Scottish Premiership.

Rangers’ performance in stopping their rivals from making it 19 straight wins at Scotland’s national stadium was especially impressive given they were taken to extra time on Thursday in their Europa League quarter-final against Braga.

With Hampden a cauldron of colour and noise, it was no surprise the game was filled with crunching tackles, mistakes, and nerve-shredding tension.


When the smoke which billowed from the pre-match pyrotechnics finally cleared, the action started and never really let up. Despite their European exploits, Rangers looked fresh as they shut down Celtic’s midfield and hampered their build up.


Joe Aribo had two headed chances to give them a deserved lead, and John Lundstram’s curling effort cracked a post as they came close to adding the gloss to a disciplined, if frantic, first period.

But Celtic, who have made Hampden their fortress in the last decade, came back in the second half when Callum McGregor’s quick free quick caught out Rangers, and Taylor fired beyond Jon McLaughlin with the help of a deflection off Bassey.

On an afternoon when Ange Postecoglou’s side looked less sure of themselves, they might have been 2-0 up and on course for the final had Cameron Carter-Vickers’ close-range shot cannoned off the bar.

But instead Arfield swept home the equaliser from James Tavernier’s cross with 12 minutes left, and from there it was Rangers who looked the side with more energy and intent heading into extra time, dismissing any notion they would fade.

Tavernier and Fashion Sakala were denied by Joe Hart in extra time, before some quick thinking by Glen Kamara released Bassey down the left, and his low delivery was prodded by Starfelt beyond his own goalkeeper under pressure from Sakala.

The explosion of noise in the Rangers end was something to behold as their decade-long pain in the cups comes another step closer to ending after a game where they had to dig incredibly deep to get the job done.

Man of the match – John Lundstram

What did we learn?

After back-to-back derby defeats in 2022, Rangers ceded the league lead to Celtic and there was a general malaise about their domestic form, in stark contrast to their Europa League run, which will continue in the semi-finals against RB Leizpig.

But to get off the floor here, especially given they had won just two of their last 11 games at Hampden, with 120 minutes already in the legs from three days prior, was a hugely impressive feat.

All of the substitutes made a huge contribution. Steven Davis brought calm amid the storm and tired legs, Kamara’s quick thinking set up the goal, while Arfield scored and Sakala was the man who forced the winner.

That was in contrast to Celtic, who seemed to suffer when Stephen Welsh and Anthony Ralston came on in the full-back positions.

Matt O’Riley did make a difference, but overall this was a reminder there is work to do with their squad building. They also looked short of ideas when Rangers were able to shut them down for long spells.

They’ll need to quickly refocus with another derby to come in the league to make sure they press home their league advantage and end the season with the league title.

Celtic manager Ange Postecoglou: “I don’t think any player from either side left that pitch without giving everything they had. Games like these are decided on moments and unfortunately it didn’t happen for us.

“You’ve got to understand that, take that disappointment and fuel it for future endeavours. We’ve had a lot of setbacks this year, we’ve just overcome them really well and really quickly. We’ve got five games now to become champions.”

Rangers manager Giovanni van Bronckhorst: “To play extra-time two times in four days… the players were magnificent. We had to dig deep and we did it as a team. We’re proud that we’re in the final.

“It’s important to be in the final but the most important thing is to win the final. We haven’t won anything yet. We want to achieve something and the belief is there that we can win the cup.”

Celtic will look to re-affirm their advantage at the top of the Scottish Premiership next Sunday when they face Ross County in Dingwall (14:30 BST).

Rangers are scheduled to be away to Motherwell earlier in the day (12:00), but have asked for that game to be brought forward to the Saturday.

Player of the match