Coronavirus: What’s happening in Canada and around the world on Tuesday 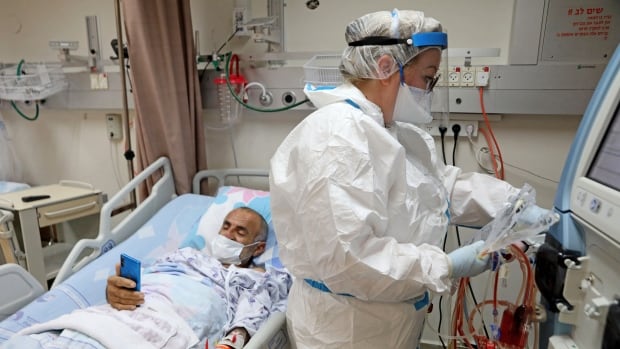 The number of new coronavirus cases around the world fell 21 per cent in the last week, marking the third consecutive week that COVID-19 cases have dropped, the World Health Organization (WHO) said Tuesday.


In the UN health agency’s weekly pandemic report, the WHO said there were more than 12 million new coronavirus infections last week. The number of new COVID-19 deaths fell eight per cent to about 67,000 worldwide, the first time that weekly deaths have fallen since early January.


WHO said Omicron remains the overwhelmingly dominant variant worldwide, accounting for more than 99 per cent of sequences shared with the world’s biggest virus database. It said Delta was the only other variant of significance, making up fewer than one per cent of shared sequences.

The WHO also reported that available vaccine evidence shows that “booster vaccination substantially improves [vaccine effectiveness]” against the Omicron variant but said more research is still needed in order to get a better idea of exactly how long such protection lasts.

WATCH | Adjusting to travel at this point of the pandemic:

Adjusting to travel at this point of the pandemic

As the federal government moves to change international travel restrictions and advisories, more people are booking trips but are considering different factors before planning a vacation. 2:03

The agency had previously said there was no proof that boosters were necessary for healthy people and pleaded with rich countries not to offer third doses to their people before sharing them with poorer countries.


Health officials have noted that Omicron causes milder disease than previous COVID-19 variants and in countries with high vaccination rates, Omicron has spread widely but COVID-19 hospitalization and death rates have not increased substantially.

Scientists, however, warn that it’s possible that more transmissible and deadly variants of COVID-19 could still emerge if the virus is allowed to spread uncontrolled.

The WHO’s Europe chief, Dr. Hans Kluge, says the region is now entering a “plausible endgame” for the virus and said there is now a “singular opportunity” for authorities to end the acute phase of the pandemic.

With lab-based testing capacity deeply strained and increasingly restricted, experts say true case counts are likely far higher than reported. Hospitalization data at the regional level is also evolving, with several provinces saying they will report figures that separate the number of people in hospital because of COVID-19 from those in hospital for another medical issue who also test positive for COVID-19.

You can read more from the Public Health Agency of Canada, which provides a detailed look at every region — including seven-day average test positivity rates — in its daily epidemiological updates.

Some businesses to keep using vaccine passports after mandates end

As provinces end mandates for proof of COVID-19 vaccination, some businesses are ready for a return to normalcy, but others say they plan to continue checking vaccine passports anyway. 1:57

In the Prairies, Manitoba registered 11 coronavirus-related deaths in the past four days, while a county in Alberta has approved a policy that disqualifies businesses with mandatory COVID-19 vaccine mandates from being awarded future county contracts.

Ontario reported 1,038 people hospitalized with COVID-19 on Tuesday, as the rate of hospitalizations in the province continues to gradually decline.

Quebec elementary and high schools students will no longer be required to wear masks in class when they return from March break, Quebec Public Health announced Tuesday.

And in the North, Nunavut says the territory will gradually ease health measures over the coming months with the goal of eventually managing the virus in a similar way as influenza.

What’s happening around the world

As of Tuesday, more than 426.5 million cases of COVID-19 had been reported worldwide, according to Johns Hopkins University’s coronavirus tracker. The reported global death toll stood at more than 5.89 million.

In Africa, Uganda plans to impose fines on people who refuse to be vaccinated, and those who fail to pay could be sent to prison under a new public health law which lawmakers are scrutinizing, parliament said.

In Europe, the EU countries agreed to open their borders to travelers from outside the bloc who have had shots against COVID-19 authorized by the World Health Organization, easing restrictions on those who received Indian and Chinese vaccines.

In the Americas, the U.S. Supreme Court turned away a challenge to Maine’s vaccine mandate for health-care workers, rebuffing for the second time a group of plaintiffs who sought a religious exemption.