Coronavirus: What’s happening in Canada and around the world on Wednesday 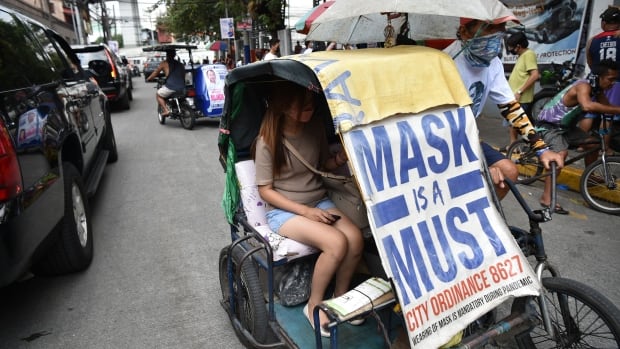 
The number of new coronavirus cases globally fell by 19 per cent in the last week while the number of deaths remained stable, according to the World Health Organization.

The UN health agency said late Tuesday in its weekly report on the pandemic that just over 16 million new COVID-19 infections and about 75,000 deaths were reported worldwide last week.


The Western Pacific was the only region to report a rise in new weekly cases, an increase of about 19 per cent, while Southeast Asia reported a decrease of about 37 per cent, the biggest drop globally.

The largest overall number of new COVID-19 cases was seen in Russia, according to the latest update, which covers the period of Feb. 7 to 13. Cases there and elsewhere in eastern Europe doubled in recent weeks, driven by a surge of the hugely infectious Omicron variant.

The highest numbers of new cases were reported in:


Reported case numbers are believed to be a vast undercount in many nations, as access to testing is limited.


WHO said that all other coronavirus variants, including Alpha, Beta and Delta, continue to decline globally as Omicron crowds them out. Among the more than 400,000 COVID-19 virus sequences uploaded to the world’s biggest virus database in the last week, more than 98 per cent were Omicron.

WHO said the BA.2 version of Omicron appears to be “steadily increasing” and its prevalence has risen in South Africa, Denmark, the U.K. and other countries.

Health officials have noted, however, that Omicron causes less severe disease than previous COVID-19 variants and in countries with high vaccination rates, hospitalization and death rates have not increased substantially, even with Omicron’s spread.

Dr. Mike Ryan, executive director of the emergencies program at the WHO, said Wednesday that testing has fallen off “remarkably” in many countries, which will impact the data about cases worldwide.

Ryan, who was speaking alongside WHO COVID-19 technical lead Dr. Maria Van Kerkhove, took questions about everything from testing and restrictions to what’s happening with Omicron and its subvariants.

“Right now, we’re in a period of great uncertainty,” Ryan said, adding that the pandemic is “by no means over.”

“Countries are having to make decisions — to try and normalize and bring society and economies back online — and there’s a tremendous political and social pressure to do that,” he said.

Ryan said he understands the drive to reopen — but he urged caution, pointing to the ongoing Omicron surge in many regions of the world. The WHO official said countries looking to ease public health restrictions should embrace a measured, step-by-step approach that recognizes the uncertainty of this stage of the pandemic.

Ryan added that one measure that should not be lifted is the need to isolate after a positive PCR or rapid antigen test. Van Kerkhove echoed the call to keep isolation protocols, saying moving away from isolation for positive cases is a “dangerous” move.

Van Kerkhove urged people to know their risk and work to lower it — no matter where they live.

“Be careful right now,” she said.

-From The Associated Press with a file from CBC News, last updated at 12:10 p.m. ET

As of Feb. 28, fully vaccinated travellers won’t need a pre-arrival PCR test to enter Canada and unvaccinated children under 12 won’t need to quarantine. The federal government will also be removing the advisory against non-essential travel. 1:52

With lab-based testing capacity deeply strained and increasingly restricted, experts say true case counts are likely far higher than reported. Hospitalization data at the regional level is also evolving, with several provinces saying they will report figures that separate the number of people in hospital because of COVID-19 from those in hospital for another medical issue who also test positive for COVID-19.

For more information on what is happening in your community — including details on outbreaks, testing capacity and local restrictions — click through to the regional coverage below.

You can also read more from the Public Health Agency of Canada, which provides a detailed look at every region — including seven-day average test positivity rates — in its daily epidemiological updates.

In Atlantic Canada, Newfoundland and Labrador Premier Andrew Furey and health officials on Wednesday announced a multi-step plan to ease COVID-19 measures in the province, with a goal of eliminating the vaccine passport program in mid-March.

Dr. Janice Fitzgerald, the province’s top doctor, said at a briefing that the province is on the downslope of the most recent, Omicron-driven wave.

Health Minister John Haggie said it’s time for people in the province to get back to a “new normal.”

The province on Wednesday reported 16 people in hospital with COVID-19 and six people are in critical care. Three more deaths due to the virus were also reported.

The review comes as the province prepares to enter its least restrictive tier of COVID-19 restrictions on Friday at 11:59 p.m. The province’s premier has said he hopes to lift all COVID restrictions in March.

As of Wednesday, three more people with COVID-19 have died in the province, hospitalizations have dropped to 89, and there are nine people in ICU.

In Central Canada, Ontario on Wednesday said COVID-19 hospitalizations in the province stood at 1,403 — down by 147 from a day earlier — with 364 people in the province’s intensive care units. Ontario also reported 47 additional deaths. The update came a day ahead of a planned easing of some public health measures, including capacity limits at businesses like restaurants and gyms.

Quebec, meanwhile, will phase out the use of its vaccine passport and it will no longer be required anywhere in the province by March 14, Health Minister Christian Dubé said Tuesday.

Starting Wednesday, Quebecers will no longer need to show proof of vaccination to enter big-box stores or government-run liquor and cannabis outlets — less than a month after the passport was imposed in those locations. And as of Feb. 21, the passport will not be required at places of worship or funeral homes, Dubé told reporters in Quebec City.

For everywhere else, including elder-care settings, restaurants, bars, gyms and entertainment venues, the passport will be withdrawn as of March 14, when most COVID-19 restrictions across the province are scheduled to expire.

Mask-wearing, however, will continue to be enforced across the province, said Dr. Luc Boileau, Quebec’s interim public health director.

On Wednesday, Quebec reported 1,995 people in hospital —a decrease of 57 from the previous day— with 129 in intensive care. Twenty-four more people have died from COVID-19 in the province.

In the North, officials in Nunavut on Tuesday announced plans to ease restrictions in 15 communities across the territory as of Monday. Premier P.J. Akeeagok also said the territory will be expanding the distribution of rapid tests to critical businesses.

The territory reported 43 new lab-confirmed cases of COVID-19 on Wednesday.

In the Prairie provinces, Manitoba’s Chief Public Health Officer Dr. Brent Roussin said Wednesday the province is in a “difficult transition phase” as it moves toward easing remaining restrictions, including mask mandates and proof of vaccine requirements by mid-March.

Roussin also said vaccines will be the most important tool to “protect ourselves [from COVID-19] moving forward.”

The province reported six more COVID-19 deaths on Wednesday and 614 people in hospital, including 38 people in ICU.

The update in Manitoba comes after the top doctor in Alberta said Tuesday that provinces are in a “period of transition” with COVID-19, from a pandemic response to an endemic one.

“After nearly two years of requirements to modify the way we have lived, worked and socialized to help reduce transmission of the virus and protect each other, it’s going to take time and effort to adjust away from mandates and toward personal risk assessments and actions,” Dr. Deena HInshaw said.

That shift will come more easily for some than others, Hinshaw said, noting that there is “no one right way” to respond to the changes.

Eased restrictions mean people will be allowed to dance and mingle in public spaces, but masks and the COVID-19 vaccine card are still required at organized gatherings like weddings and sports tournaments, which resume for adults.

Mask requirements, the vaccine card and restrictions at long-term care homes, schools and childcare centres, as well as faith services, are expected to be reviewed by March 15, and again by April 12.

-From CBC News and The Canadian Press, last updated at 2:50 p.m. ET

What’s happening around the world

As of Wednesday afternoon, more than 417 million cases of COVID-19 had been reported worldwide, according to Johns Hopkins University’s coronavirus tracker. The reported global death toll stood at more than 5.8 million.

In the Asia-Pacific region, Hong Kong is facing its worst outbreak of the pandemic, topping 2,000 new COVID-19 cases per day this week. The city government has already instituted strict rules, banning gatherings of more than two households.

But health-care facilities are beginning to overflow, forcing the city’s Caritas Medical Center on Wednesday to treat some patients in beds outside the building.

In Europe, Germany’s leaders have announced plans to end most of the country’s coronavirus restrictions by March 20. The decision coincided with moves by neighbouring Austria and Switzerland to drop many of their virus curbs sooner.

Germany saw infections caused by the Omicron variant surge later than in several other European countries. Officials have attributed this to the restrictions that have been in place since December.

In Africa, the World Health Organization office for Africa on Wednesday said more than 11 million cases had been reported on the continent, with 244,000 deaths.

Meanwhile, German vaccine maker BioNTech, which developed the first widely approved shot against COVID-19 together with Pfizer, unveiled plans Wednesday to establish manufacturing facilities in Africa that would boost the availability of much-needed medicines on the continent.

The modular design, presented at a ceremony in Marburg, Germany, consists of shipping containers fitted with the equipment necessary to make the company’s mRNA-based vaccine from start to finish, save for the final step of filling doses into bottles.

BioNTech has been criticized by some campaign groups for refusing to suspend its vaccine patents and let rivals manufacture the shots as part of an effort to make them more widely available, especially in poor countries. The company argues that the process of making mRNA vaccines is difficult and it prefers to work with local partners to ensure consistent quality of the shots worldwide.

The first turnkey facility will be shipped to either Senegal or Rwanda in the second half of this year, BioNTech said. It aims to start production of up to 50 million doses of vaccine a year there within 12 months, pending approval from local regulators.

In the Middle East, Israel will start offering AstraZeneca’s antibody cocktail Evusheld to people with compromised immune systems who did not get a sufficient antibody boost from vaccines.

In the Americas, Disney World plans to make masks optional for fully vaccinated guests from Thursday, an update on its website showed, reversing a policy introduced in mid-2021.

Brazil reported 120,549 new cases of coronavirus in the past 24 hours, and 854 deaths from COVID-19, data from the Health Ministry showed Tuesday. The South American country has now registered 27,659,052 confirmed cases since the pandemic began, while the official death toll has risen to 639,689, according to ministry data.

-From Reuters, The Associated Press and CBC News, last updated at 3 p.m. ET

Have questions about this story? We’re answering as many as we can in the comments.

Germany Says Its Policy on China Is Under Development | World News