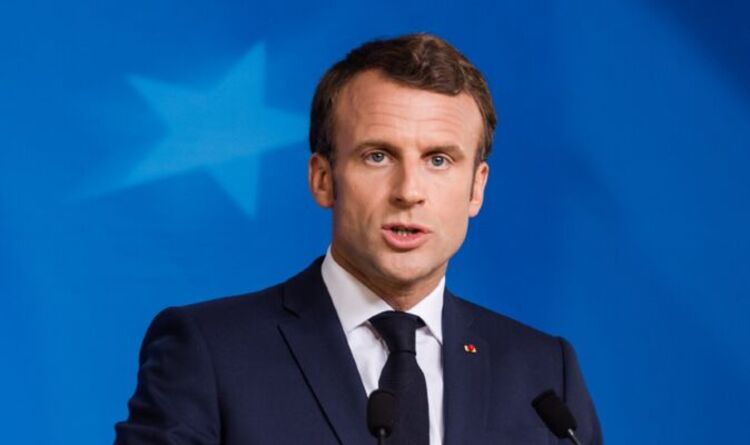 
This article contains affiliate links, we may receive a commission on any sales we generate from it. Learn more

Mr Macron beat long-time rival, National Rally leader Marine Le Pen in the first-round of the election, but the outcome is far less certain for the second round scheduled for April 24. Mr Macron, a former investment banker, could leverage his track record of allowing cryptocurrency firms to take root in France to edge ahead to re-election in a final push before the second-round votes are cast, Joseph Robertson has claimed.

Mr Robertson, director of the Orthodox Conservative Group think tank, told Express.co.uk that the crucial votes to court were those of the powerful business sector, as Mr Macron has started to do.

Mr Robertson said that France forging ahead with its cryptocurrency and digital currency policies would be all the more important for Macron, who will face Marine Le Pen in the second round as he “clings to an ever-shakier majority”.

He added: “His resolve to lead the country during the nationalised crypto boom has no doubt helped stabilise his decreasing popularity in the business sector.


“Although the issue may not appeal to the public at large, France’s quick activity in this area will no doubt have encouraged many financial influencers who ply their trade in the Francosphere to cast their might (and vote) behind the incumbent president.”

The outcome is far less certain for the second round scheduled for April 24 (Image: Getty)

Binance chief executive Changpeng Zhou praised the French stance on digital currencies as the platform seeks to establish its European hub in Paris.

Binance is in the process of being established as a “digital asset service provider” with the French markets regulator.

Speaking at the Paris stock exchange, Mr Zhou commended Emmanuel Macron’s government for its “open-minded” approach to the relatively new and unregulated sector.

READ MORE: EU savaged for shameless ‘spin’ as it gloats over Brexit move

He said: “France has some very pro-business, pro-crypto regulations.”

He added that Mr Macron held a “phenomenal” attitude towards the industry.

He commented: “I think France has one of the most progressive and open-minded governments that could help in developing pro-crypto regulations.”

Mr Zhou also announced that Binance would invest in blockchain technology projects via a Paris start-up incubator, in a wider initiative investing €100 million into the country.

DON’T MISS:
Brexit LIVE: Major industry transformed by UK’s exit from bloc [LIVE]
French election results visualised: Everything you need to know [MAP]
POLL: Is Britain making the most of Brexit, or could PM do more? [POLL]

Opening up to cryptocurrencies has proved controversial on governmental levels in Europe (Image: Getty)

Opening up to cryptocurrencies has proved controversial on governmental levels in Europe.

The UK Financial Conduct Authority raised concerns over the platform having access to UK payments through a deal with payments provider Paysafe.

The City watchdog had previously banned Binance from legally operating in Britain.

Despite this, Mr Zhou said on Wednesday the company had “seen a great shift of attitude towards crypto over the past year”.

He continued: “Until last year, regulators were talking in a negative way, while many regulators today approach us with a positive note.”

At the beginning of 2022, a study published by pro-cryptocurrency group ADAN, along with KPMG and Ipsos, found that one in twelve French adults had invested in cryptocurrencies or NFTs, better known as non-fungible tokens.

Four percent of those asked said a candidate’s stance on cryptocurrencies would sway their vote.

Faustine Fleuret, the CEO of ADAN, described how, in general, the EU and Britain take a cautious attitude towards the sector.

She told CoinDesk: “I think in French and European speeches there is maybe a focus on risks, more than on opportunities – a focus on protection, rather than raising innovation.”

The European Parliament voted to introduce laws on how cryptocurrency providers track customers – something that was unpopular within the sector that has touted anonymity as a key strength.

BBC News: Gen Z Is ‘Hooked’ on Cryptocurrency and NFTs