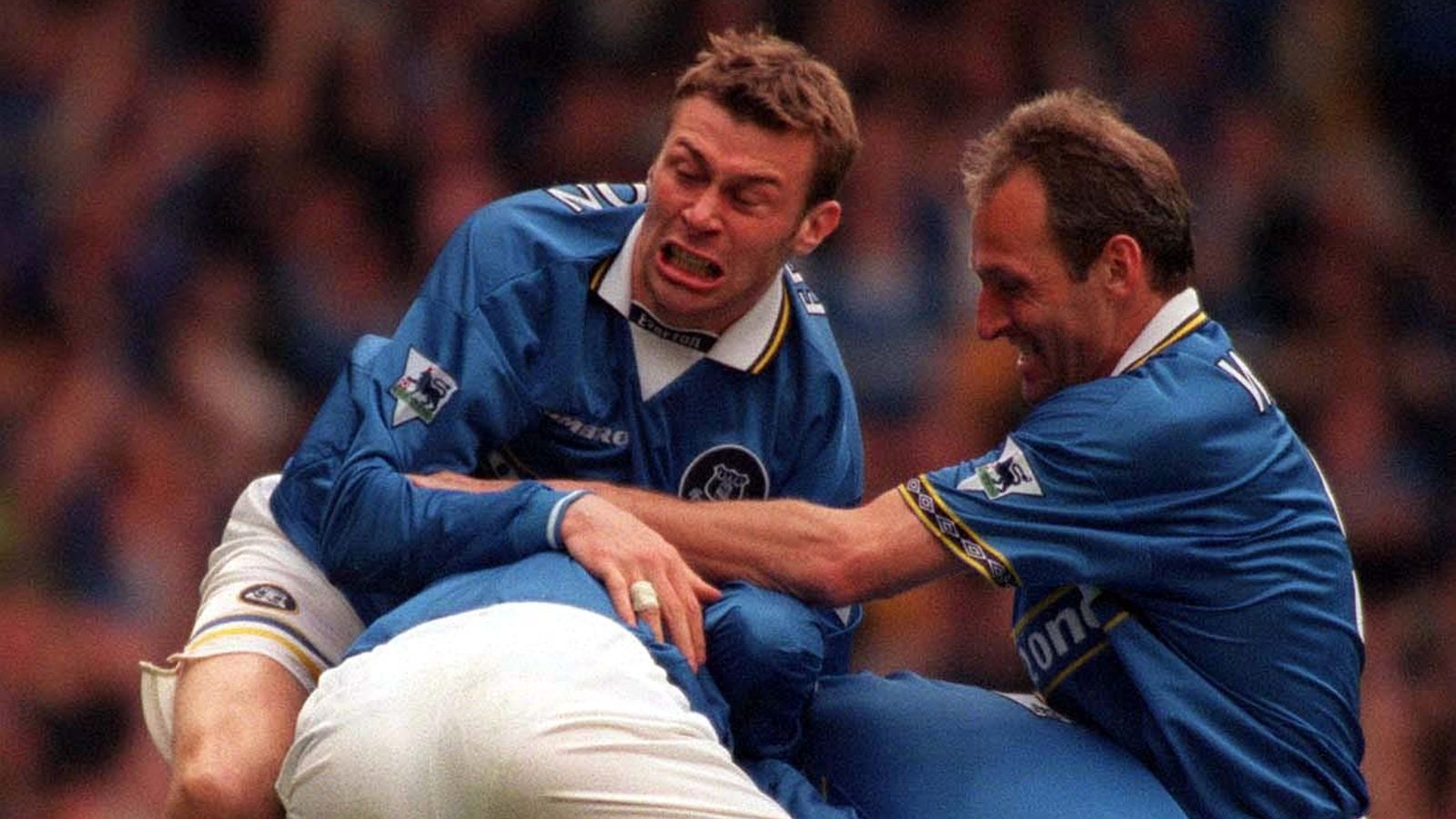 As Everton prepare to take on Liverpool in the 206th Merseyside league derby, the threat of relegation remains a daunting concern. With seven games remaining to ensure they avoid that terrible fate, my mind wandered back 24 years to a day of tension, panic and sheer consternation.


It was May 10, 1998, Goodison Park as Everton met Coventry City, knowing unless they bettered Bolton Wanderers’ result at Chelsea they would lose their top-flight status of 44 years. It was a desperate time for Evertonians and as press officer at the club at the time, I was at the heart of the unfolding drama.

It’s a day I will never forget. Arriving at the ground there was a tangible sense of dread, which wasn’t helped when I was summoned to speak with then chairman Peter Johnson, and had to be checked by police before entering the boardroom, as he’d received various threats in the days leading up to the game from disgruntled fans.


He wanted to talk about what my plan was for the after-match arrangements, whether it was good news or bad, how we would address the situation. What followed still leaves me cold to this day, my idea was that having him face the media after the game, regardless of the outcome, was just too risky.

In those days, communication to the fans came via the press box or ClubCall, although expecting supporters to pay 50p a minute for that sort of announcement seemed ambitious at best. My idea was to record two versions of his post-match statement, one if we stayed up and one if the worst was to happen.

I can still hear, with great clarity, his voice breaking as he uttered the words: “The relegation of this great club is a terrible tragedy”. It was then the reality and enormity of the situation hit me, this was real. On the way out he said “Alan, if you put the wrong one out, you know you’re sacked don’t you?” I assured him if that happened he wouldn’t need to tell me!


‘You could see the fear on everybody’s face’

I left the relatively calmer environment of the chairman’s office to the bedlam of the players’ tunnel. You could see the fear on everybody’s face, from the manager Howard Kendall to the players, to the stewards and staff. Pressure was certainly evident.


That pressure was no more reflected than as I was announcing the Coventry team over the PA system. I noticed Kendall was beckoning me to the dug out, he was extremely animated with his gestures to ‘come here now’. I was halfway through the visitors line-up before dropping the mic to go and find out what the panic was all about.

He balled: “Look at the size of the grass! Look how long it is!” Equally as stressed, I replied: “I don’t drive the ******* tractor Howard!” I’d never spoken to him like that but things were at fever pitch by now!

The game kicked off and unlikely hero Gareth Farrelly’s seventh-minute scorcher settled, to a degree, the nerves for a while. I spent much of the game running up and down the tunnel relaying the news from Stamford Bridge, as Bolton were not getting the result they wanted.

Things seemed to be going to plan until very late in the game when Dion Dublin towered a header over Thomas Myhre in the Everton goal. Another Coventry City goal and that would be it, those last few minutes were the worst of my career in football.

The final whistle sounded and together with a 2-0 defeat for Bolton at Chelsea, Everton had done it, they survived!

A mass invasion of the pitch took place. My job was to now make sure the players were off the pitch and safe. We had a police cordon around the tunnel area to prevent fans getting down there. It was chaotic!

Myhre, was the only player I had not corralled. I desperately searched for the ‘keeper and all of a sudden he appeared out of the crowd, towel over his shoulder. “Did we stay up,” he rather weirdly enquired. “Do you think you’d still be standing if we hadn’t?” I replied. He turned and ran back into the euphoric fans, he was on his own now, it was every man for himself!

As I turned, a supporter – I’ll never forget him with bright red hair – grabbed me by the throat and pinned me up against the dugout. “This isn’t Everton, Alan” he screamed at me. As you can imagine, I agreed profusely.

Back in the manager’s room, Don Hutchison came in looking for the manager. We couldn’t find him until we looked in a small kit lock-up room. He was sat in tears, the emotion had finally got to Everton’s most successful manager. Don consoled him and he rejoined the group counting our blessings. It wasn’t celebrating by any means.

A week before the Coventry game, Everton played at Highbury against Arsenal and were annihilated by Arsene Wenger’s champions. The current Everton team have to go to the Emirates Stadium on the final day of this season.

Everton cannot allow the situation to arise where they still need points on that day, as I fear the outcome would be very different. They need to start on Sunday, even if it is a huge task, to try and get something at Anfield. Motivation should be at its peak for a Merseyside derby.

There are plenty of points still to play for and there will be twists and turns in the next few weeks but those games are coming thick and fast for both Burnley and Everton and that final weekend will be here before we know it.