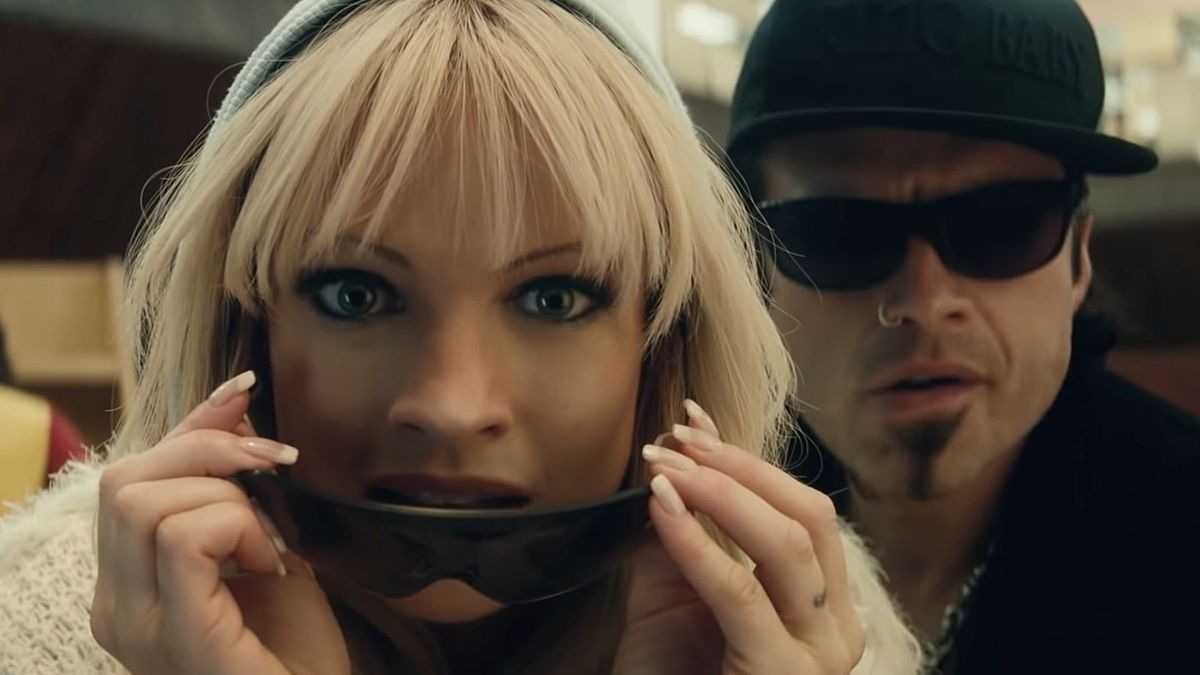 You might think Hulu’s Pam and Tommy miniseries is about a stolen sex tape. It is, but that Hi-8 video cassette tape is ultimately a kind of kindling for the dawn of the Internet age.


This fact isn’t lost on the producers who fill the tale of a stiffed handyman’s quest to make money off Baywatch star Pamela Anderson and Motley Crue’s Tommy Lee’s stolen tape with countless period tech touches that make clear that the Internet is the true fourth lead in this story after Lily James (Anderson), Sebastian Stan (Lee), and Seth Rogen (handyman Rand Gauthier).

Credit goes, in part, to Rogen who also serves as producer, for ensuring that all the details are right. Honestly, they have to be or the reason that the tape became such an international sensation makes little sense.


Back in 1995, there was no way to distribute content (salacious or otherwise) unless you used traditional channels: Movie houses, TV, big-name VHS distribution.

The type of mid-90s geek who might have been on BBS in the 1980s, Gauthier is the first to recognize that the burgeoning Internet might be a pathway to ill-gotten gains.

It’s not that 1995 and 1996’s World Wide Web was filled with e-commerce opportunities and streaming video. Quite the contrary.


We now live in a world where 4K streaming videos of the Olympic games from halfway around the world are available on our smartphones. The Internet of the mid-90’s was not the place to stream video content. At most, it was useful to share video files you could play offline. The very first South Park episode was an early example. It was shared widely across the Internet, but rarely, if ever, played online.


As Gauthier notes to an early purveyor of “online adult content,” streaming online video would not be a thing until the arrival of the 56K modem dial-up modem. At the time, most modem speeds maxed out at 9600 bits per second.

Amazon, which was founded in 1994 was growing fast, but buying books – really anything – online was still relatively new, as was the world of e-commerce.

In Pam and Tommy, there is no online transaction system on the website where Gauthier promotes the video, just an address to mail the checks.

Gauthier is a sleaze bag with the insight of a Zuckerberg, Bezos, or Gates. He recognizes the Internet as a contact and delivery system for then tens of thousands of people online and one that, at the time, could shield the proprietor from view. Back then it wasn’t so easy to figure out who owned a domain and the idea of identifying someone’s location via an IP address was still in its infancy.

However, what Pam and Tommy makes clear is that the tape’s existence on the web served as a sort of magnet for the still relatively new Information Super Highway. Even Pam and Tommy, who barely know what the Web is, are inexorably drawn to it.

The scene in which they visit a library to see the website for themselves is perfect. Libraries at the time had just started to bring in computers and the Internet and didn’t do much of a job of policing who was viewing what on their systems. The couple carefully types in the URL and then, with the computer whirring and beeping (in a perfect recreation of every sound and the pokey dial-up speed of the time), watch as the basic HTML website slowly builds before their eyes.

The show itself is at times comic and tragic.

The tragedy comes from what the illegal release of the tape did to Pamela Anderson. And it’s an early reminder of the power and danger that existed deep in the Internet’s DNA since Day One.

While the use of VHS tape and related systems made it easy to copy and distribute the tape – well beyond Gauthier and his partner’s control – it’s the Internet’s information distribution network that spread the news of the tape far beyond the scope of any platform available before then.

News of the tape and the excitement around the Internet appeared to grow in tandem back then. Pamela and Tommy became casualties of innovation.

I can’t help but watch Pamela and Tommy with two brains. There’s the one that is freshly appalled at the cruel damage done to Pamela Anderson and there’s the fascination with the machinations of the dawn of Internet technology. How little we really knew and understood. All those possibilities and not one bit of caution.

We’ve basically carried on in the same way for 27 years since.