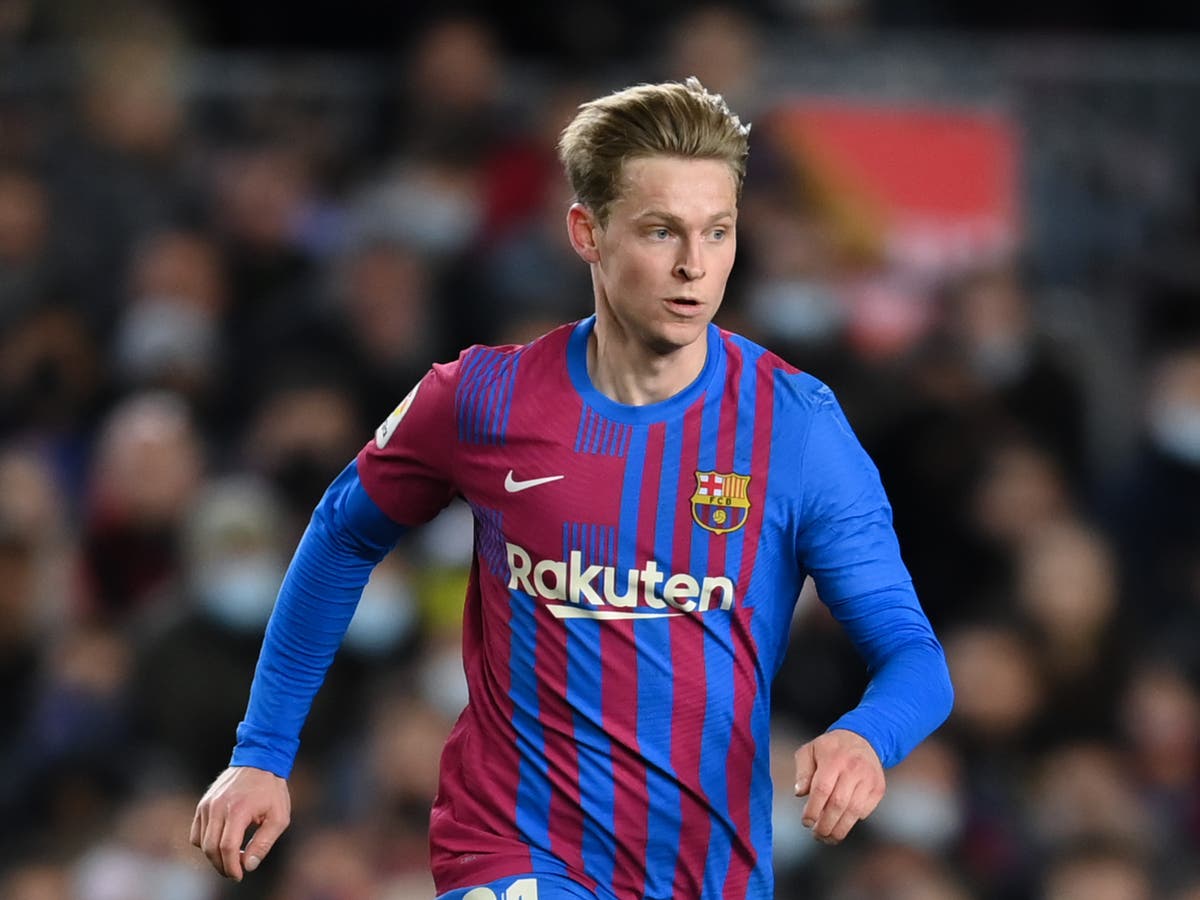 Frenkie de Jong wants to stay at Barcelona but if he must leave then his preferred destination is not Manchester United, according to Sport, despite the huge lengths the United hierarchy are going to to sign Erik ten Hag’s primary target in this summer transfer window. Instead, it is reported the Dutch 25-year-old would only consider switches to either Bayern Munich or United’s Premier League rivals, Chelsea. This protracted deal looks like running right to transfer deadline day on 31 August.

Meanwhile Chelsea have moved a step closer to signing the highly rated Sevilla defender Jules Kounde. The Blues have agreed personal terms with the 23-year-old France international centre-back and have now met the Spanish club’s asking price of £55m, according to several reports, with Kounde set to have a medical over the next 48 hours. Thomas Tuchel is rebuilding his defence after the departure of Antonio Rudiger to Real Madrid and Andreas Christensen to Barcelona, leaving the ageing Thiago Silva and Cesar Azpilicueta as Chelsea’s frontline centre-halves. Kounde would add to the recent arrival of Kalidou Koulibaly at Stamford Bridge.


Elsewhere, Real Madrid do not want to re-sign Cristiano Ronaldo, according to Marca. The Mail reports Leicester have rejected a £15m bid from Monaco for Boubakary Soumare. And Leicester are willing to consider big-money offers for James Maddison and Kelechi Iheanacho in order to raise funds to strengthen the squad, the Telegraph claims.

Follow all the latest transfer news with our live blog below:

Germany face Austria in the second quarter-final of Euro 2022 at the Brentford Community Stadium this evening. The Germans arrived in England with lowered expectations but are now contenders to take the title after a perfect group stage. They defeated Denmark, Spain and Finland to win all three group matches and finish top of Group B. The eight-time European champions will now feel confident of reaching the semi-finals as they take on an over-performing Austrian side tonight.

Austria are one of the biggest underdogs left in the competition. No-one was expecting them to make it out of the group stages but a confident display against England on the opening matchday showed they may have been underestimated. Although they lost that fixture 1-0 they responded with a victory over Northern Ireland before defeating Norway 1-0 in the crucial final group game to finish second behind England and reach the quarter-finals.

No side covered more ground than Austria during the group stages and they will have to produce yet another determined performance if they are to upset Germany tonight. Many of Austria’s team also play in the Frauen-Bundesliga so both sides will be familiar with each other and the winner will set up a meeting with either France or the Netherlands in the next round.

Who will join England in the semi-finals?

It was the type of goal that Georgia Stanway, growing up in the footballing outpost of Barrow-in-Furness, playing in the back garden with her brothers, would always have imagined herself scoring. The sort of emphatic, long-range strike that is befitting of such a stage, that deserved to book England’s place in the semi-finals of another major international tournament.

But in the white heat of the extra time win over Spain in Brighton, when that dream had become a reality, it was a moment she could barely remember.

“It all feels like a massive blur at the moment,” the Bayern Munich-bound midfielder said after the final whistle. “I need to watch it back and see where I was, how it went in the net, I literally can’t remember. I remember saying to one of the girls, ‘At what moment did we actually score?’”

That is one of the great ironies of such moments in elite sport. While a goal as spectacular and as significant as Stanway’s will live long in the memory of many who witnessed it, whether they were one of the 28,994 inside the Amex or the millions watching at home, it will only be a vague, hazed mess of sweat, strains and lactic acid in the mind of the woman who scored it. You wait all your life to score a goal like that and then struggle to remember how you did what did, or even why you did.

Mark Critchley looks at England’s matchwinner in the Euro 2022 quarter-finals:

Here’s the latest around The Independent over summer transfer news and deals being struck:

Bruno Fernandes says he doesn’t know what’s on Cristiano Ronaldo’s mind in terms of a transfer this summer and that he must be given space to overcome personal issues which have kept him off Man United’s pre-season tour.

Aaron Ramsey has been left off Juventus’ own pre-season tour amid rumours he’s set for a permanent exit from Turin, though his £400,000 a week contract is once again proving problematic in terms of finding a club.

And Mikel Arteta has revealed the biggest reasons behind Arsenal’s move for Oleksandr Zinchenko, who is soon set to seal a £32m transfer from Man City.

Nicolas Pepe is one of the names likely to depart Arsenal this summer, be it on loan or permanently, with HITC via football.london suggesting that Newcastle United might be his destination.

The Magpies are keen on a winger this summer, it seems, given their links to Jack Harrison too.

Meanwhile, the Athletic say Arsenal are still keen on Youri Tielemans and Leicester are “open to selling” if they get a “suitable offer” for the Belgian centre mid.

The Guardian are reporting that if Chelsea go on and complete the Jules Kounde deal, who Barcelona also want, the Catalan outfit will turn their attentions to Arsenal’s William Saliba.

The French defender is expected to finally be given a chance this season by the Gunners but he won’t necessarily be first choice, which perhaps a move to the Camp Nou might do.

Marcos Alonso and Cesar Azpilicueta are still on Barca’s minds, too.

Portuguese journalist Pedro Sepulveda has been talking about Cristiano Ronaldo on Sky Sports News today and still firmly believes he’s set for a transfer away from Old Trafford this summer.

“I can’t see Ronaldo from Man Utd next season. The two main teams one step closer than the others are Chelsea and Atletico Madrid,” he said.

“I can see him playing for those two teams – Chelsea have a new owner, a new project, with money to spend on transfers.

“Likewise Madrid is Ronaldo’s second home, he’s got a home there, his wife is from there. It’s a big option for him – but first of all, they would need to find the money. The transfer fee would be around €15-20m, but his salary would be very high for them.

“We already saw Bayern Munich making an offer for Joao Felix, which was refused, but with the possibility of Ronaldo, I think Atletico will have to decide what they want for their future.”

Still a long way to run on this one.

Usually there are a whole load of players available on free transfers who have to wait until nearer the end of the transfer window to sort out their futures, though quite a few have done so already. The aforementioned Matic and Dybala are two, but also Tarkowski, Pogba, Kessie, Rudiger and Sule have all moved after their contracts expired and have new clubs already.

So who is left on the free transfer list? Quite a few, right now. Here are some of the top names and highest ‘valued’ players who are without teams – any you fancy for your club?!

Georginio Wijnaldum’s short, unproductive and unhappy stay in Paris looks to be coming to a rapid close.

The Dutch midfielder is set for a transfer to AS Roma, reports Italian media and Sky Sport, just a year after moving to PSG on a free transfer.

PSG want a permanent deal and there’s no agreement between the clubs just yet, with Roma having already added midfielder Nemanja Matic this summer as well as yesterday’s deal for free agent Paulo Dybala.

Two potential deals for Fulham are moving closer to a resolution but neither are quite there yet.

Kevin Mbabu is almost signed and sealed, with a deal agreed with Wolfsburg over a €5.5m transfer. The 27-year-old has already agreed personal terms but a medical is still required, says Fabrizio Romano.

Bernd Leno on the other hand is still a way off completion, with no agreement yet between Fulham and Arsenal – but the goalkeeper is happy with the move to go through, reports Florian Plettenberg. The Gunners will need to lower their asking price for the deal to happen.

Juventus have signed Gleison Bremer and, apparently, this is a big boost for Tottenham. Matthijs de Ligt’s move to Bayern Munich left the Turin club with a hole in defence and money in their pockets, some of which has now gone on Bremer – instead of Pau Torres.

The Villarreal defender is a target for Spurs in the final weeks of the window, say football.london, and there’s no major competition left now Juve are out of the running.

Man United were linked with him for much of last year but cannot offer Champions League football.