Russian troops in Ukraine’s eastern Donbas region have shifted from a steamroller strategy to one of relentlessly chipping away at their opponents in the hope of grinding them down.


Ukraine’s army has little option but to try to stall their larger and better-equipped enemy in the sprawling plains of Donbas, where artillery is king.

“It’s not like 2014, there’s no defined front along a river or a road or a motorway,” says Iryna Rybakova, spokeswoman for the Ukrainian army’s 93rd brigade, which is at the centre of the fighting.

“It’s one of their villages or one of ours: it’s more like a chessboard. At the moment, we aren’t able to make the enemy retreat from our front line,” she admits.

In March, the Russian army said it would focus its efforts on the Donbas regions of Donetsk and Lugansk where pro-Russia separatists have been active since 2014.


But on day 66 of the war, Moscow is still far from obtaining the victory that many believe President Vladimir Putin wants to declare by May 9, a date that marks Russia’s victory over the Nazis in 1945.


In southern Ukraine, Russian forces have taken over a strip of territory stretching from the besieged port city of Mariupol to Kherson, the region just north of Crimea.

But the Donbas is still far from being taken.

“Even if there has been some advance by Russian troops on the ground, it is not very fast,” Russian military expert Alexander Khramchikhin told AFP.

Apart from the hard-fought takeover of most of the southern port city of Mariupol on the shores of the Sea of Azov, the frontline that emerged from the 2014 war has not moved in the southern Donbas.

“In the Lugansk region, the objectives announced by Moscow are close to being achieved but in Donetsk, the advance is proving more difficult,” said Khramchikhin.

Kramatorsk is a key target for Moscow as capital of Ukrainian-controlled part of the Donbas region. (Photo: AFP)

For now, Russian forces are gradually moving down towards Kramatorsk, capital of Ukrainian-controlled Donbas and a key target for Moscow, while also moving up towards Pokrovsk, on the region’s western flank.

In the past two weeks, they have gained a foothold in several small towns where urban combat is raging, such as Rubizhne, which had 57,000 residents before the war.

But no place of importance has been taken since the capture of Kreminna on April 18, a town of 18,000 people before the war, 50 kilometres (30 miles) northeast of Kramatorsk.

Pessimism about the chances of pushing back the Russians appears to be spreading.

Abandoned trains left on level crossings, bulldozed streets and barricaded roads suggest the focus has shifted to spoiling tactics to slow the advance.

With the battle now shifted to the rolling plains and industrial cities of the Donbas, the confrontation is largely down to artillery — what Soviet leader Stalin called “the god of war”. 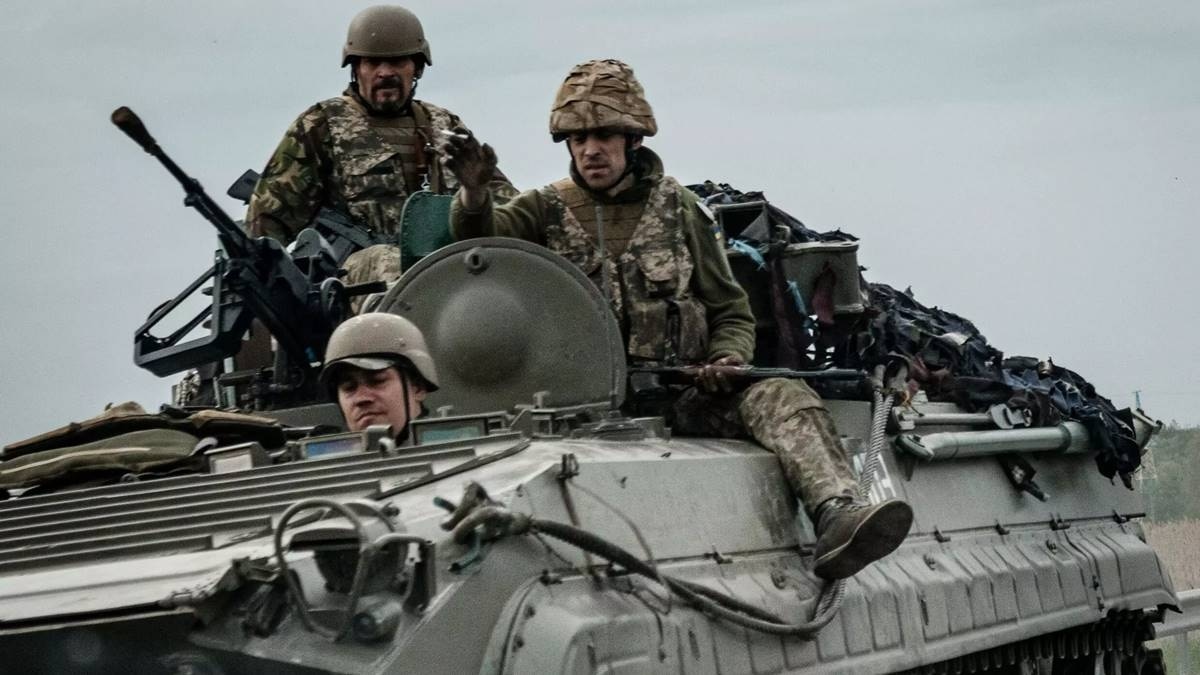 In sprawling plains of Donbas where artillery is king, Ukrainian troops admit they are not in a place to force a Russian retreat. (Photo: AFP)

But the balance of power remains hugely disproportionate, with Russia up to “five times stronger in terms of equipment”, says Iryna Terehovych, a 40-year-old sergeant in the 123rd Ukrainian brigade.

“In Kreminna, we only had a few NLAW anti-tank missile systems and some didn’t even work.”

Faced with the longer-range Tochka-U missiles, the Ukrainian defences have only been able to intercept some of them.

Kyiv has long been hoping that NATO would close the air space over Ukraine but it never materialised. And Ukraine has only a few SU-24 and SU-25 fighter planes to keep watch on Russian positions.

On the ground, there are roughly 40,000 to 50,000 Ukrainian soldiers in the Donbas, analysts say. Moscow has not said anything about its forces in the area.

“It’s too late for us,” said one Ukrainian soldier, who was struggling to repair a broken-down tank he said was used in the Soviet-Afghan war (1979-1989).

Although they are holding their ground on the battlefield, many of Ukraine’s infantry soldiers admit to feeling overwhelmed. Although they’re holding their ground on the battlefield, many of Ukraine’s infantry soldiers admit to feeling overwhelmed. (Photo: AFP)

“Viking”, a 27-year-old staff sergeant who fought in Kreminna said his comrades are exhausted and waiting for the order to pull back.

“If it was a war between infantry forces, we would have a chance. But in this area, it’s first and foremost an artillery war and we don’t have enough artillery,” he says.

Rybakova of the 93rd brigade said Ukrainian forces were working “in a more targeted way”.

“We’ve learnt to save our ammunition during eight years of war,” she said.

“For example, we fire when their troops try to break through.”

The question remains whether the Ukrainian army will be forced to abandon the region, where it has been fighting since 2014.

“Either we go overboard on the heroics and we all die, or we pull back, stay alive and regroup our forces,” said Sergeant Iryna Terehovych.

READ: Explainer | How civilian drones are being used in Russia-Ukraine war