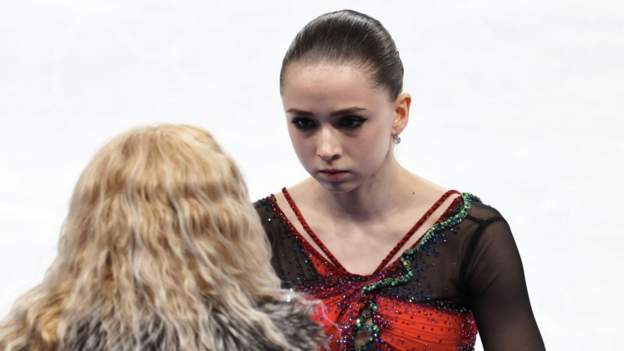 It was “chilling” to see the “cold” way distraught Kamila Valieva was treated by her Russian coach after falls in her figure skating routine at Beijing 2022, says International Olympic Committee president Thomas Bach.

Valieva, weighed down by a doping scandal and questions over the wisdom of allowing her to compete, came fourth on Thursday after several mistakes.

There was no hug and no comfort for the 15-year-old from coach Eteri Tutberidze when she immediately came off the ice, instead she was asked “why did you stop fighting?”


Valieva was favourite to win the women’s event, having set several world records in the short time since she made her senior debut in October. She had led after Tuesday’s short programme but the series of falls and messy landings on Thursday ruled her out of a podium finish.

“When I saw how she was received by her closest entourage with what appeared to be a tremendous coldness, it was chilling to see this, rather than giving her comfort, rather than to try to help her,” said Bach.

Tutberidze, whose training methods were already under the spotlight, did put her arm around the young Russian while she waited for her score. But moments before that had demanded to know: “Why did you let it go? Explain it to me, why?”


Bach said he was “very, very disturbed” by what he had seen when watching the competition on television.


“All of this does not give me much confidence in this closest entourage of Kamila, neither with regard to what happened in the past, nor as far as it concerns the future,” he added.

“How to deal, how to address, how to treat a minor athlete at the age of 15 under such an obvious mental stress.”

Valieva is the subject of an anti-doping investigation after testing positive for angina drug trimetazidine. The World Anti-Doping Agency (Wada) has also said it will be investigating Valieva’s entourage, including coaches, doctors and other adults surrounding her.

Before discovering she had failed a test, she had helped the Russian Olympic Committee (ROC) win the team event at Beijing 2022, but the medals for that will only be handed out once the doping case has concluded.

Throughout the events of the past 11 days, Tutberidze has been present at the ice rink while Valieva continued training amid the uncertainty over whether she would be able to compete.

In the early days when news of the failed drugs test broke, Valieva was pictured hugging the coach during emotional practices and in her athlete biography on the Olympics information service, the youngster names Tutberidze as her “hero”.

Tutberidze has overseen something of a production line in successful young Russian skaters in recent years at the Sambo-70 club in Moscow – including new Olympic champion Anna Shcherbakova and silver medallist Alexandra Trusova, who are both 17.

They have either all retired while still teenagers or gone on a break from the sport with no return imminent.

And from the way Trusova was speaking on Thursday after her silver medal, she may soon be another name to add to the list of early retirements.

Valieva, Shcherbakova and Trusova are dubbed the ‘quad squad’ because they all perform quadruple jumps, which are rare in women’s figure skating. Of the 25 athletes competing in the women’s free skate on Thursday, only this trio attempted them.

There is no doubt that the coaching is producing high-scoring skaters, but there will surely now be many wondering at what cost given two left the ice in tears on Thursday.

Bach said the IOC could not do much to control an athlete’s entourage.

“In the end, it’s a question where we need the support of governments.”

Russians are competing at these Games under the flag of the ROC as their country is banned from international sporting events under sanctions relating to its doping past.

Pressure on Valieva ‘beyond my imagination’ – Bach

Valieva’s participation in the event had been controversial and had meant she had been under the media spotlight for 10 days in Beijing.

She was allowed to compete in the women’s event after the Court of Arbitration for Sport (Cas) ruled against re-imposing a provisional suspension on her.

She discovered on 8 February – the day after helping ROC win the team event – that she had tested positive for angina drug trimetazidine but then successfully appealed against a Russian Anti-Doping Agency decision to impose a provisional suspension.

That decision was upheld by Cas after appeals by the IOC, Wada and International Skating Union, with the court’s ruling pointing to “exceptional circumstances” regarding her age and the timing of the test result, which came during the Games and nearly six weeks after the sample was taken.

The IOC did not hide its displeasure at the fact she was being allowed to compete, saying it would put an asterisk next to the results if she finished in the top three until her case was resolved.

Wada, meanwhile, says Cas ignored the “clear and unambiguous terms” of its code regarding the criteria for lifting a mandatory provisional suspension.

It said Cas had effectively “rewritten” the code to say a mandatory suspension was now optional in the case of ‘protected persons’.

“[Such a move] risks undermining the integrity of sporting competition and the confidence of athletes that they are competing on a level playing field,” the global anti-doping body said in a statement on Friday.

“It is surprising and of serious concern to Wada that a Cas panel would see fit to depart from the clear terms of the code.”

The Cas ruling said it would do “irreparable harm” to not allow her to compete, but many were left questioning on Thursday whether it had in fact been worse to let her compete.

Bach, who won a fencing gold medal at the 1976 Olympics, said he could not even imagine the pressure she had been under.

“I know from my athlete time a little bit about pressure. But this pressure is beyond my imagination,” he added.

“To see her there struggling on the ice, seeing how she tries to compose herself again, how then she tries to finish her programme, you could in every movement in the body language, you could feel that this is immense mental stress and maybe she would have preferred just to leave the ice and try to leave this story behind her.”

But even now she will not be able to leave it behind as she still faces the doping investigation and is yet to request the testing of the B sample as is her right under Wada rules.

And who knows whether she will even make another Olympics given the track record of those who have come through the system before her.

“And we can then only hope for her to see that this is addressed in the right way and there is not a dramatic experience for such a young woman.

In response to Bach, the deputy prime minister of Russia, Dmitry Chernyshenko, said: “We are deeply disappointed to see an IOC President weave his own fictional narrative on the feelings of our athletes, and then present these publicly as the voice of the IOC.

“This is frankly inappropriate and wrong.

“Win or lose we know our athletes are world-beating, and they do too.”